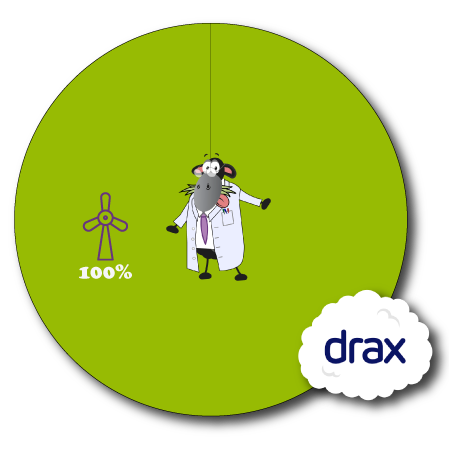 WE WORK WITH DRAX AND 30 OTHER SUPPLIERS

Haven Power was acquired by Drax Group Plc in 2009 which allowed it to sell electricity directly to customers. Operations continued under the name of Haven Power until October 2021 to then continue under the Drax company name.

The formation of Drax started in 1990 when Drax Power station came under the ownership of National Power, one of the newly formed generating companies following the privatisation of the electricity industry under the Electricity Act 1989. In 1999 Drax Power Station was acquired by AES Corporation with refinancing creating AES Drax Holdings and AES Drax Energy. Drax Power station and the AES corporation parted company in 2003 with ownership coming under several financial institutions before being refinanced and shares being listed in Drax Group PLC on the London Stock Exchange in 2005.

Drax Energy Solutions Ltd is the retail trading arm of Drax Group PLC in the UK which was established in 2006.

As well as acquiring Haven power in 2009 Drax Group then acquired Opus Energy in 2016 and Pinnacle Renewable Energy Inc in April 2021.

What is Drax’s Address?

What is Drax’s Company Number?

What is Drax’s VAT Number?

What is Drax’s Fuel Mix?

Drax has a fuel mix of 100% renewable sources.

If you’d like to find out more about Drax or switching suppliers or if you’d simply like us to compare Drax prices for you as part of our no-obligation comparison service, phone us on