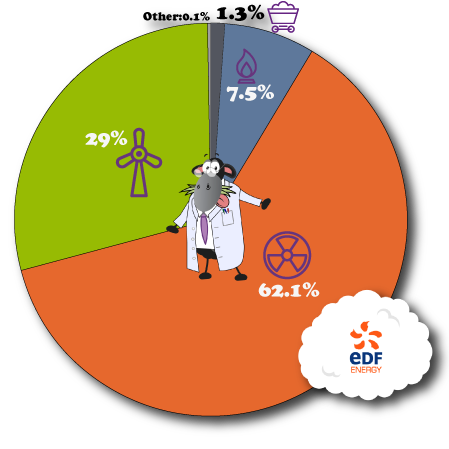 WE WORK WITH EDF AND 30 OTHER SUPPLIERS

EDF Energy was formed in January 2002 after the acquisition and merger of SWEB Energy PLC, London Electricity PLC and Seeboard PLC. It is wholly owned by the French State-owned EDF (Électricité de France).

The distribution network operation side of EDF came under the branch of EDF named EDF Energy Networks which was then sold in 2010 to Cheung Kong Group (CKG) before being renamed as UK Power Networks in December of 2014.

What is EDF’s Address?

What is EDF’s Company Number?

What is EDF’s VAT Number?

What is EDF’s Fuel Mix?

If you’d like to find out more about EDF Energy or switching suppliers or if you’d simply like us to compare EDF Energy prices for you as part of our no-obligation comparison service, phone us on