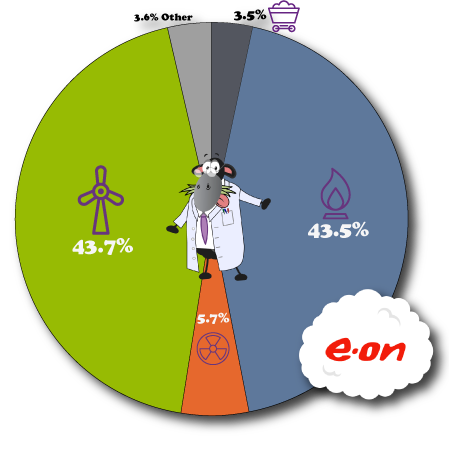 WE WORK WITH EON AND 30 OTHER SUPPLIERS

E.ON – based in Essen, Germany is one of the largest investor-owned electricity service providers in the world.  Created in 2000 after the merger of VEBA (Vereinigte Elektrizitäts und Bergwerks Aktiengesellschaft or “United Electricity and Mining Corporation) and VIAG (Vereinigte Industrieunternehmungen AG; United Industrial Enterprises Corporation).

Worldwide E.On has over 33 million customers and operates in over 30 countries.

E.ON UK is a subsidiary of E.ON, formed after E.on acquired Powergen in 2002. Powergen was originally founded in 1989 and at that time wholly owned by the UK government after acquiring around 50 per cent of the Central Electricity Generating Board generating capacity.

What is EON’s Address?

What is EON’s Company Number?

What is EON’s VAT Number?

What is EON’s Fuel Mix?

If you’d like to find out more about EON or switching suppliers or if you’d simply like us to compare EON prices for you as part of our no-obligation comparison service, phone us on